Biking the “World’s Most Dangerous Road” is not for the faint of the heart.

Death Road or al Camino de la Muerte is 65km of downhill riding. You start at 4700m and ride down to 1200m along a winding road, hugging the edge of the occasional 600m cliff.

Over 200 people were killed every year on this road. Entire buses have fallen over its deep cliffs. You can still find dozens of graves and memorials along the way.

A new paved road was built in 2006. The old road is now used by crazy, thrill-seeking cyclists. But even with the old road being used for downhill descents, Death Road still claims 2-3 lives every year.

My Experience Biking Death Road in My Chacos

When I was in La Paz, Bolivia, I met a couple of Dutch guys during breakfast at the hostel I was staying at. These guys were just as brave enough to bike Death Road, which is known as the “World’s Most Dangerous Road.”

After handing over 400 bolivianos ($58 USD) and signing our lives away, we piled into a Toyota mini-bus early in the morning and drove an hour to the start of our ride in La Cumbre.

Getting Fitted To Ride

But there was one thing they didn’t give you… shoes!

During my entire backpacking trip in South America, I only carried two pairs of shoes – Chacos and hiking boots.

The guys told me that we would get proper shoes for biking, so instead of wearing my hiking boots, I casually strolled out of my hostel wearing my Chacos.

Yes, I Wear Socks With Sandals

Luckily, I stuffed a pair of socks in my day pack. I ended up wearing socks during the first portion of our ride, which was slightly colder because of the higher elevation.

I also thought that wearing socks would add a little bit of protection from the loose terrain that my feet would be exposed to.

After getting fitted in all of our biking gear, we took off down a paved road. The first section of the ride opened up to a valley of winding roads amongst the rugged and varied terrain of Bolivia’s Yungas region.

After an hour of fast and fun riding down the paved road, we arrived at the park control point. It costs 25 bolivianos to enter Cotapata National Park. Most tour companies will remind you to bring cash with you to pay for this. Our guide made this really easy for us by collecting our money and paying the fees to get our park tickets.

The paved road ends where the real Death Road begins. All of the elements completely change at this point. The paved road turns into a narrow dirt road with tons of loose rocks.

We were briefed on a few things before we took off through this section.

Our guide told us that some cars still use the old road. Cars drive up the left side of the road so they can have a better view of where they are on the road. This meant that we were forced to bike on the same side as the steep drop-off!

We continued to ride downhill to lower elevations and slowly entered the cloud forest. The low visibility from the clouds and fog made everything a little more eerie and more challenging.

Getting All Fixed Up

All guides are trained and certified, and there’s always a support vehicle following your group. Our mini-bus followed our group with extra equipment, extra bikes, and all of the belongings that we didn’t want to carry on our backs.

There were so many incidents along our ride that made me thankful for the support vehicle that was following us. I think we used up all of the reserve bikes.

And Then There Were Four Accidents…

It felt like there was an accident every hour.

Then a pedal fell off.

And as I was zooming downhill, my bike chain completely broke off.

THAT was the cherry on top.

I couldn’t believe it. A flat tire was understandable but biking downhill when your chain comes off is not something you want to happen ever, but especially on Death Road! Thankfully my brakes worked properly.

These are the six reasons why I wouldn’t recommend booking with Pro Downhill in La Paz. Even though our guide was amazing, I would rather pay more money for bikes that are well-maintained and ensure a safe ride.

Do It For The Gram

There are lots of waterfalls along the way and everything is completely green. This area near Coroico is absolutely beautiful. If it’s raining a lot the roads will become wet, which is another thing to be aware of when biking this road.

Most of my guides down in South America were amazing. They’re really fun and make you do crazy things for a photo op, like blocking off part of the road and forcing you to ride under a waterfall.

Right before we reached the valley bottom, we took a slight detour. We ended up at a local’s home where we could purchase water, snacks, and celebratory beers! Most of us drank a refreshing Paceña, a Bolivian beer produced in La Paz.

We loaded all of our bikes back onto the Toyota mini-bus, piled in and drove 10 minutes to our final stop on our tour. There was a buffet lunch but there wasn’t much left when we got there. There are many different tour groups that stop at this same location on their tours. There was also a pool and showers.

After eating and relaxing, we hopped back into the mini-bus and drove 3 hours back to La Paz. When we got back, we received a t-shirt that said “I survived Death Road” and a photo CD with all of the pictures that our guide took along the way.

I did it. I survived Death Road! Here is some advice so you can too.

If you want to bike Death Road, you want to go with a safe, trusted, and reliable tour company. If you’re a backpacker like me, you also want value on a budget.

Screw the backpackers budget this time.

I DO NOT recommend Pro Downhill as your tour company for biking Death Road. My only reason for this was the conditions of the bikes. With the amount of accidents that happened and the bikes that were “fixed” on the go, I would not feel comfortable going with them again.

There are plenty of other tour companies around La Paz that you can book with, which I highly suggest.

Tips To Know Before You Go

Would you bike the “World’s Most Dangerous Road”? Let me know in the comments!
Subscribe

Great memories! Thanks for sharing Andrea!

Such a thrilling experience!

The area looks awesome. Guess I have my next travel destination! Really strange though – these are mountain bikes should be able to resist a bit more use. One bike okay but this many …

Bolivia is actually an incredible country and there’s so much to do! Check out climbing Huyana Potosi. The mountain bikes with this company aren’t maintained well. They run so many tours a day so they really get run down. 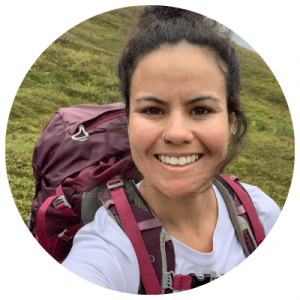 Hi! I’m Andrea Kuuipo.
I’m a lifelong Alaskan sharing trails and tales to help you plan your adventures around Alaska and abroad.

Found a random lake on Google Maps and went for a

Everyone was at Eklutna Lake on Sunday and it’s

A collection of mushrooms I found in Girdwood 🍄

I’m down to my last week in Alaska 😢 before h